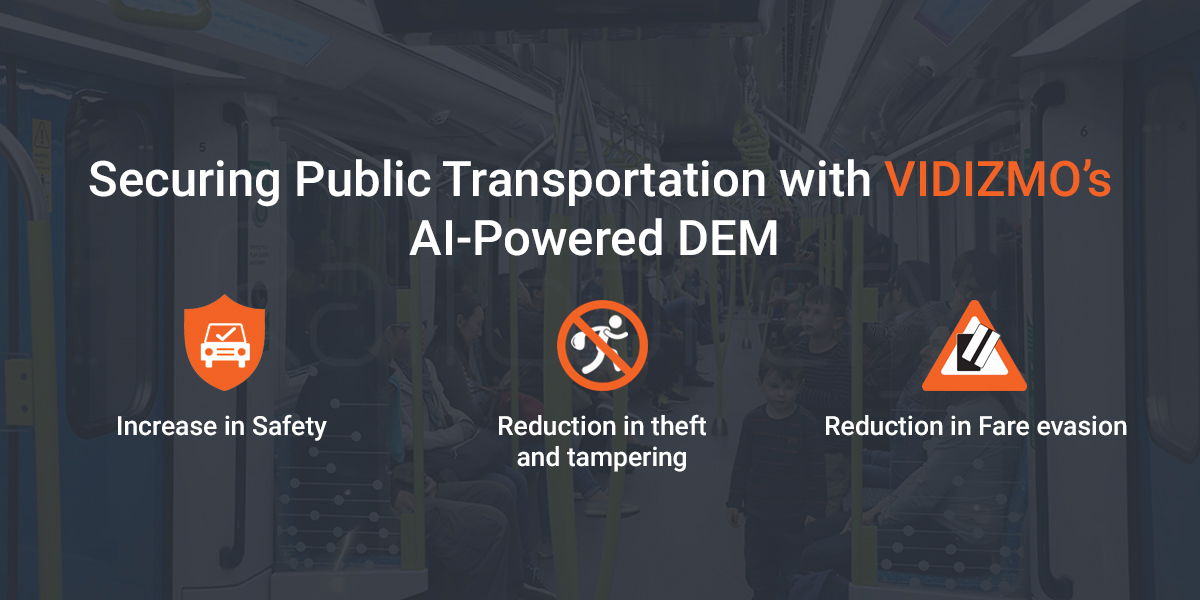 Ensuring safe, reliable, and flexible transportation to the public is one of the fundamental responsibilities for any transportation authority. Public confidence is gained only through consistent service delivery combined with discernible safety and security provisions. According to a report published by the International Association of Public Transport (UITP), 73 percent of the public transport authorities have video surveillance installed. Of those, 85.3 percent of large public transport authorities have disparate types of video surveillance systems, all of which store, manage and host their own data.

A public transport authority which has multiple systems installed would face challenges ensuring public safety. For instance, a public safety officer responsible for ensuring safety would need to look into numerous systems to provide tangible results. Data stored in these different surveillance systems will need to be searched, analyzed, and visualized before any evaluation of insights can take place. And in many cases, those ensuring safety, are unable to find the proper data required because relevant footage or digital asset may be stored and managed by another system. In situations where insights are critical and need to be delivered in a particular time frame, this method of finding relevant data from multiple sources is highly time-consuming and inefficient.

Increase in Safety:  For years, terrorism has been one of the biggest threats facing any public space and transport around the world. Public transport facilities are attractive targets for terrorists due to their vulnerability and potential for mass casualties. Therefore, the safety and security of commuters are the top priority for any public transport authority.

For instance, if an object like a suitcase left unaccompanied in the middle of a public transit system such as a subway would be automatically detected by VIDIZMO’s object left behind feature. VIDIZMO object left behind detector solution uses 3D-enhanced image processing to detect in real-time any suspicious objects that are added to or removed from an indoor area under observation. This feature can be configured to provide alerts to police departments of the suspicious object detected.

Features can also be used in combination, for example, VIDIZMO object tracking combined with facial recognition and loitering detection features in instances such as mass shootings. VIDIZMO AI features can not only detect the face of a potential shooter but also track the object such as a gun or rifle in the shooter's hand and detect suspicious movements of the possible shooter. By automatically alerting the law enforcement agency even before the incident occurs and preventing incidents will allow public transport authorities to save the lives of hundreds of commuters and ensure maximal security and safety for a public transport facility.

Reduction in theft and tampering: From cutting wires to spray painting security cameras – thieves have long found ways around getting caught by surveillance cameras. Replacing a damaged or stolen camera is not only expensive but also an unnecessary hassle. It consumes time and resources, and for a transport authority, this also means a potential blind spot in the place where the surveillance camera was installed.

VIDIZMO offers camera tamper detection that automatically detects any cases of tampering. In events that would prevent a clear view of the monitored scene and generate alerts when its ability to record has been affected. VIDIZMO camera tamper detection is especially helpful for locations where the camera may be physically attacked or can be blocked. The system can also be customized to generate automatic alerts. Therefore, in a situation where a camera is vandalized, an automatic alert would be generated to officials. Thereby informing and connecting them to the surveillance system even when they are not there to monitor the feed-in person.

Through our AI solutions, VIDIZMO designs different algorithms to increase the effectiveness of the surveillance system. The algorithms are customizable as per the requirements of a solution. Moreover, it will not trigger alarms upon debris, environmental conditions, or biologicals entering the field of view.

Reduction in Fare evasion: According to a post by the New York Times, a reputed public transport authority loses about $215 million a year from fare evasion on the subways and buses. About 208,000 people ride the subway each day without paying. The loss in potential revenue leads to a cut in services and loss in efficiency and accessibility offered by the transport authority to commuters.

So this feature is useful when someone tries to jump turnstile and avoid ticket payment by sending an alert to the relevant authorities. In a market where fare-evasion is so prevalent, a fare detection system is worth millions of dollars by reduction of fare theft and an increase in potential revenue, which will impact the bottom line.

To know more about how VIDIZMO’s DEM can offer public tranport authorities all-in-one solution, contact us today or visit our website for details.

Manage All Your Surveillance Videos in a Centralized System