Drones are far more capable than they are used for. With a drone mapping software, you can geo map your drone footage and the sensory information.
by Ziad Amir Updated on March 3, 2021

Geospatial technology is constantly evolving, and as it integrates with other sciences, its applications are seemingly becoming limitless. One area that has historically faltered in overall innovation, though, is the geo mapping of drone footage and drone mapping software. Few organizations have taken a leadership role in this area, and this could be attributed to a lack of awareness of potential advances across industries.

One of the biggest issues facing the advancement of geospatial technology in drone videos, however, is the idea that combining captured footage with geographic information system (GIS) data is simply too difficult. While this belief may have once had merit, the emergence of tools like VIDIZMO has muted many of these arguments.

The Growth of Drone Technology Use 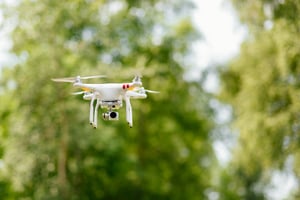 Unmanned aerial videos (UAVs) have a long and storied past – spanning back to 1848 – but it was evolving video technology that assisted the widespread use of the technology. Drones are now used in commercial, governmental, industrial, military, private and non-governmental organization (NGO) settings across the world. In fact, investment in UAV hardware nearly doubled in just five years.

Drones are great when a live aerial view is essential. In the construction industry, this reduces the need for ground-based assessments and thus minimizes the danger of injurious falls. Research has also shown that search and rescue efforts are more successful when using UAV technology. If your organization needs geospatial data, however, drones alone simple aren’t enough. You need a drone mapping software.

While you could manually integrate current GIS technology into UAV videos, there are many challenges when doing so. Geo mapping drone footage in real time is a preferable solution, but many resources for this task still create issues that can negatively affect your final outcome. Even with UAV technology reaching unexpected levels, additional geospatial tools are still essential. 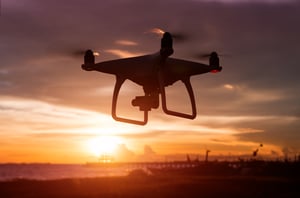 Sensors aboard drones are capable of registering time-series data that can provide a wealth of information regarding a traversed route. Data such as atmospheric pressure, temperature, height, target location and much more can be mapped onto a location pin based on a drone’s position at any given moment. This data can prove invaluable for a multitude of applications.

Unfortunately, it can be difficult to analyze sensor-collected information while simultaneously reviewing recorded video. That’s because Key Length Value (KLV) data is necessary to accomplish this. This data extraction and mapping technology is frequently used to embed information into videos. While the tool is often used in motion pictures, KLV also greatly improves geo mapping drone footage in a drone mapping software.

Key Length Value elements are packaged in Protocol Data Units (PDUs). These are the integral aspects of geo mapping your drone footage since the packages are tagged with timestamps. They save data based on the date and time it was collected, and this can then be correlated with video, audio and other collected information. KLV removes most of the challenges with geospatial drone technology.

How VIDIZMO Raises the Bar

VIDIZMO utilizes Key Length Value elements in its Digital Evidence Management (DEM) technology, but it also doubles as a drone mapping software. The resource is already used for law enforcement purposes around the world, but the overall application of the technology is not restricted by industry. The following VIDIZMO tools allow you to analyze geospatial data in drone videos - with no field-specific impediments.

The Future Of Drone Footage 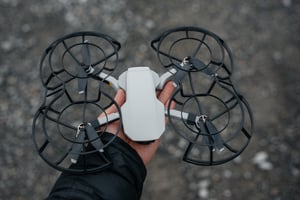 The applications of UAV technology have expanded in leaps and bounds in recent years, and geo mapping of drone footage has been greatly improved upon thanks to resources like VIDIZMO. As with any other technology that has ingratiated itself into various industries, though, there’s little reason to think innovation has reached its peak.

Unmanned aerial vehicles are already being utilized in most industries, and in the majority of instances, the technology has reached its Sixth Generation. This means UAV tech has gained commercial suitability along with a variety of other features. Once it reaches the Seventh Generation, however, full compliance with regulatory and safety standards along with full autonomy and airspace awareness will be realized.

The greatest aspect of ever-evolving UAV technology is that its improvement will only make other tools stronger. Resources like VIDIZMO will have far more data to work with as this progression takes place, and this will make the geospatial and information technology aspects of your industry far more advanced. Geo mapping drone footage is only the tip of the iceberg.

Mining, search and rescue, agriculture and law enforcement are just a few of the areas that can directly benefit from a drone mapping software. Advancements in this area may have been hindered due to a lack of national coordination in the past, but passage of the Geospatial Data Act shows that professionals across all industries are paying more attention.

VIDIZMO makes geo mapping recorded drone footage a simple process with significant implications for collecting and utilizing data. By syncing videos with geospatial data gathered by drone sensors, you can take every aspect of your organization to the next level.

Get More Insights, Context, and Better Search For Your Content Through VIDIZMO’s Metadata