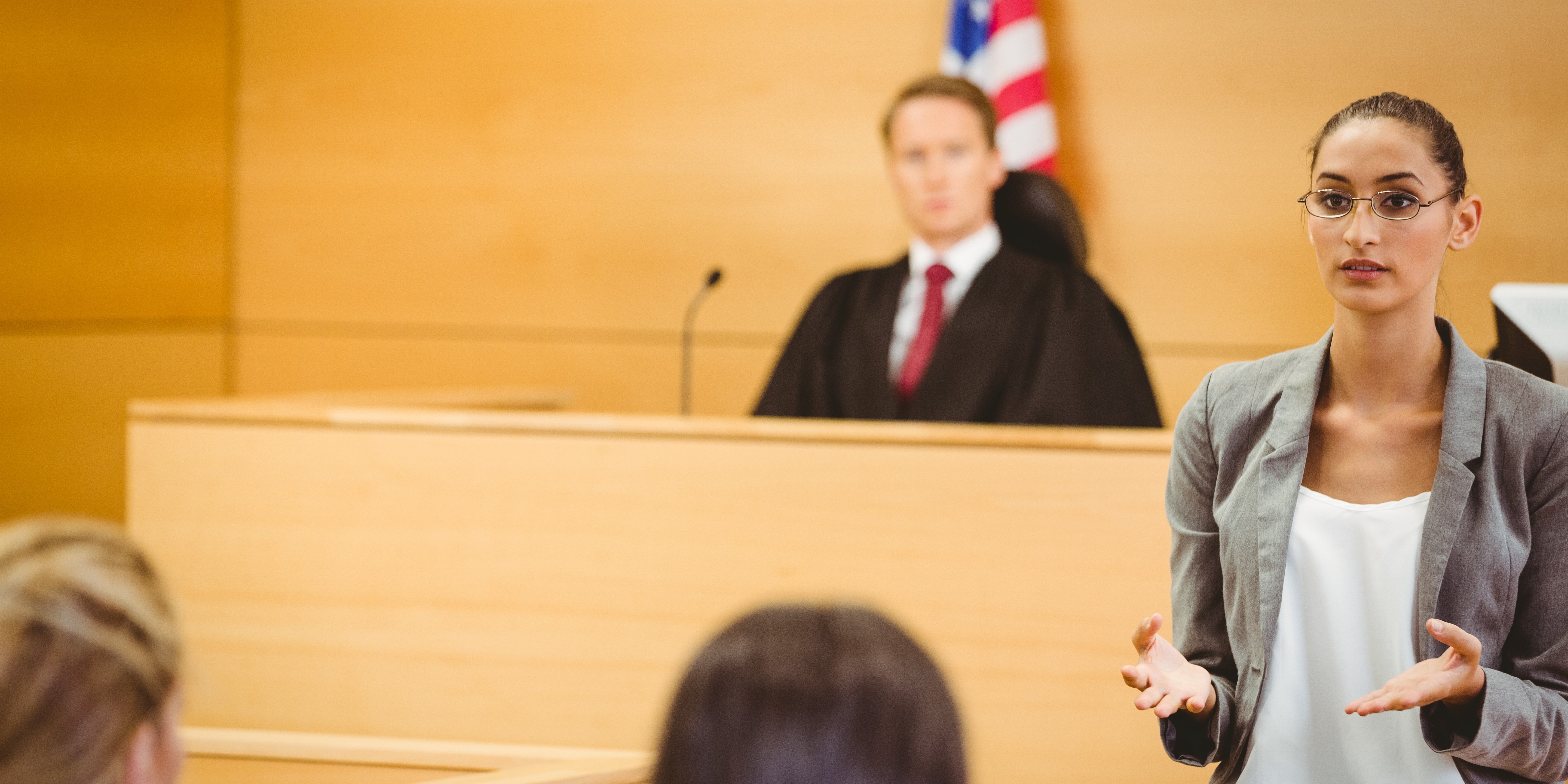 How hard can it be to present video evidence in court? This statement is not referring to the difficulty to play the video and do a presentation. But rather, using a video as evidence to build a case. That is a whole other ballgame.

It is imperative for legal attorneys to understand the context of the incident in video evidence. So that the judge and jury can come to the right verdict. This means which segment to clip, which to redact, and finally, how to present video evidence in court with relevant facts.

With the proliferation of surveillance cameras and cellphones in everyone’s pockets, video evidence is now mainstream in court proceedings. However, not every video clip is admissible in court.

The Rules of Evidence 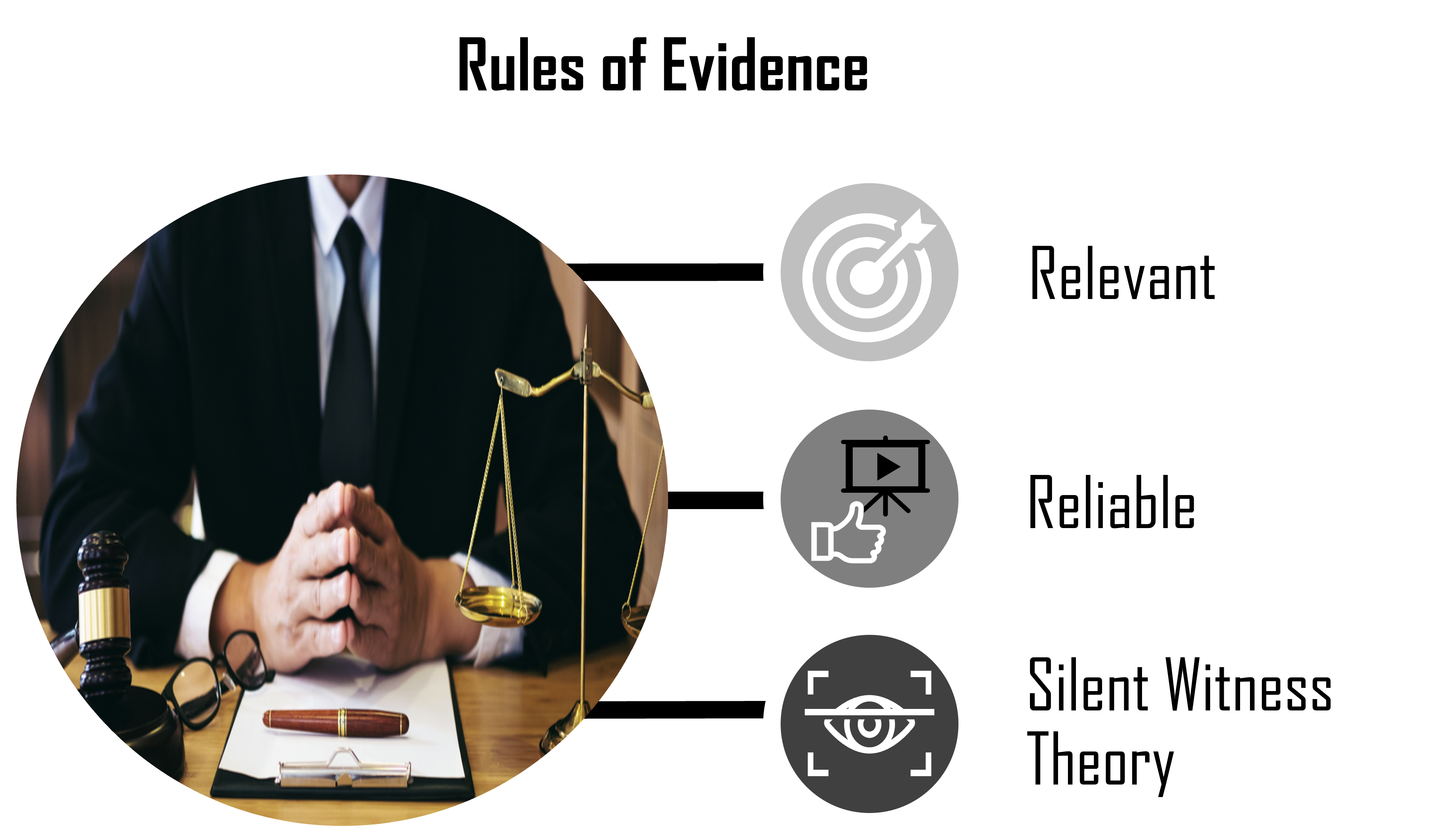 Evidence Must Be Relevant

Just because an incident has been captured does not imply that it is an open and shut case.

It is up to the attorneys to filter out irrelevant segments that do not accurately represent the case, because the context and timing of video evidence may be the deciding factor in court proceedings.

Evidence Must Be Reliable

Evidence needs to be lawfully obtained and from a reliable source. It must be authentic and not manipulated or tampered with in any way.

Some videos come from poorly managed systems such as general stores and suburbs. How these recordings are stored and shared raises eyebrows to the originality and credibility of the video evidence presented in court.

In such scenarios, witnesses are required to testify if the contents within the footage purport what it claims to show.

Video Evidence Without any Witnesses

In a situation where no witness is present to testify against the video evidence in court, how to check for its authenticity? By checking the capturing environment, you can deduce when, where, and even why the footage was recorded.

Under the Silent Witness theory, if the video evidence captured comes from a properly-managed system like those in banks, large shopping centers, and places where security is tight, it may stand alone as substantive evidence without accompanying a witness testimony.

How to Present Video Evidence in Court 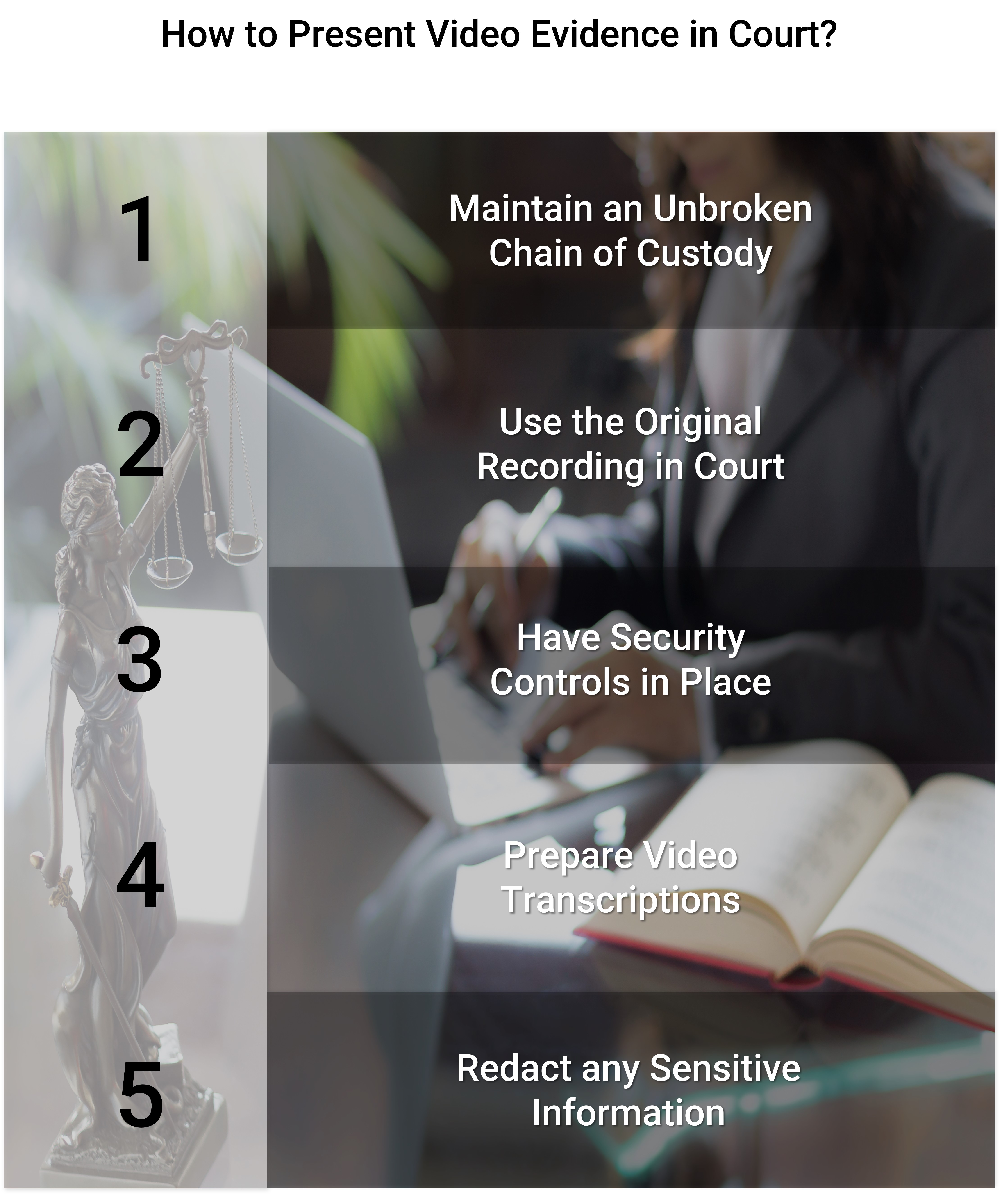 Now that you are aware of the criteria, here are some tips to use video evidence in court to make a winning case.

1. Maintain an Unbroken Chain of Custody

Aside from checking how the video evidence has been tampered with or running through deep-fake technology, it is imperative to also present an unmodifiable record of all the actions in court.

One of the greatest challenges facing law enforcement is the digital evidence collection process.

Nowadays, the prevalence of video editing software makes it dangerously simple to manipulate videos. Not having a monitoring system to track each change on a file means there are multiple ways to twist and complicate the truth around a crime scene.

Therefore, the judge and jury in court may question who has had possession of such video evidence, and how it was managed since the incident was captured.

2. Use the Original Recording in Court

While analyzing and enhancing file segments, law enforcement users work on a duplicate version of the file. To present in court, attorneys prepare rigorously to anticipate any claims against how and where video evidence was created.

At times, submitting an original file is a safer bet as some courts may not accept enhancements and clippings in video evidence.

3. Have Security Controls in Place

Successfully having video evidence admissibility also requires one to have proper security controls in place.

Without it, the evidence can be easily tampered, reuploaded with a different version, changed by unauthorized personnel such as malicious insiders, or be exposed to external cyberattacks and more.

Transcription not only meets compliance requirements but ensures accessibility when presenting an interview room recording. Not everyone in court will be able to hear the video perfectly.

To counter that, the video should be transcribed. If audiovisual evidence is in a foreign language, translation can help to reduce or eliminate ambiguity.

By hiding all Personally identifiable information (PII) such as faces, bodies and license plates through redaction, law enforcement agencies can protect the privacy of witnesses and innocent bystanders as well as prevent lawsuits from violating requirements as per GDPR, FOIA, CCPA and other region-specific data privacy laws.

When it comes to court hearings, every single piece of evidence matters. Several times, the evidence holds enough weightage to turn around a case entirely.

Therefore, it is necessary to appropriate digital evidence disclosure by ingesting it from all sources.

Evidence can be sourced from various elements. A crime scene may have CCTVs and bystanders with mobile phones recording them. There could be dash cam footage of a getaway vehicle or a fleeing culprit. Officers could be interrogating a potential suspect or an eyewitness, carrying information that is being recorded in their body cams.

The system stores it on a platform that allows centralized access to the data for the users that have the necessary permissions to access it.

Learn more on Digital Evidence Disclosure to understand better why we need to extract evidence from all sources.

How would you bring video evidence to the court at the time of a trial? The days of carrying it in CDs and pen drives have ended. Now, digital evidence is shared digitally.

But wait! Sharing digital evidence through online channels isn’t safe. What we need is a platform such as VIDIZMO DEMS that incorporates various mechanisms to keep the process of sharing evidence with prosecutors, jury and other law enforcers safe.

You may wonder how does VIDIZMO DEMS presents itself to solve the video evidence authenticity issue in court?

By helping law enforcement and legal attorneys offer a consolidated digital evidence platform that effectively manages, stores, and processes digital evidence like videos, images, audio, documents etc. With robust security controls, your files will meet compliance set forth by the CJIS, GDPR, CCPA, FedRAMP, and others.

Fulfill the court’s prerequisites for video evidence admissibility by maintaining both audit log and chain of custody reports, run tamper detection to check for unauthorized changes, and automate most of the back-office tasks for legal purposes.

Stressed about video evidence presenting its own set of challenges in terms of transcription, redaction, secure storage and how to meet court deadlines? Look no further!

For administrative workflows that take up valuable time, DEMS Artificial Intelligence automatically transcribes and translates videos, accelerates the redaction and review time in a matter of clicks by automatically detecting and tracking faces & bodies. You can even hide PII present in custom objects like symbols, tattoos, logos etc., and mute or bleep spoken words.

What’s more? The spoken words in transcriptions can be labeled and searchable to bring out clues and solve cases faster.

But that's not all there is. VIDIZMO DEMS is a complete system that provides much more to meet the needs of law enforcement officers.

Learn more about the features of VIDIZMO DEMS by clicking below. Or feel free to contact us for questions and queries.