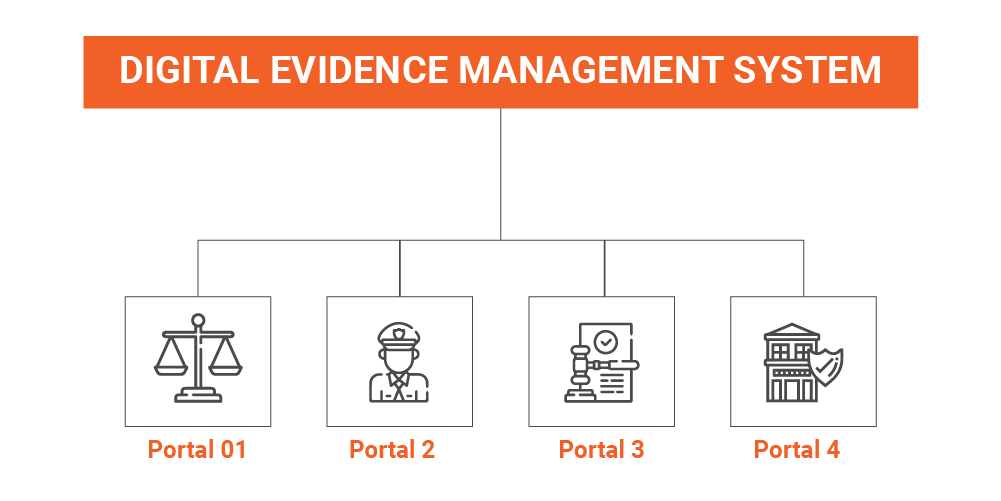 With digital media becoming the major form of evidence, more and more public safety and criminal justice stakeholders such as police officers and attorneys are adapting digital portals to streamline the way they can collect, manage and share digital evidence. When it comes to criminal investigations and law enforcement operations, there are several different departments and stakeholders involved, operating on the same system. But that doesn't mean everyone should have access to just any evidence.

Privacy is of utmost importance when it comes to handling sensitive data such as digital evidence. Additionally, regulations and compliances such as CJIS make it legally mandatory to take certain measures to protect and ensure the integrity and authenticity of digital evidence or face consequences such as fines or even imprisonment. Keeping all evidence in the same system can potentially make it accessible to unauthorized parties if the necessary precautions aren't taken.

From inter and intra-agency collaboration to sharing of evidence between a prosecutor and defense attorney during discovery, different stakeholders need to work together to solve criminal cases. Industries such as law enforcement need to keep evidence within departments to ensure they aren't shared with non-relevant people such as unauthorized officers. Law enforcement agencies consist of multiple departments working on various cases while using a single, consolidated system. Certain cases might occasionally require officers from different departments to share information and work together. Sometimes, agencies may need to work with another agency to solve a case when an investigation occurs in another jurisdiction or requires help from another location. In such a scenario, it's important to make sure they can only access evidence data that is relevant to the case or matter at hand and nothing more. It's necessary to control what others can see since security concerns and compliances can make it risky to use a single system for sharing evidence. Similarly, prosecutors need to keep certain information to themselves or otherwise redact evidence before sharing it with parties such as the defense. For these reasons, keeping digital evidence in a single, accessible space can be risky and challenging.

Organizations and agencies working in the legal department or dealing with data such as criminal justice information and digital evidence need to take certain precautions to ensure the security and privacy of their data aren't breached.  Exposing digital evidence unnecessarily to unauthorized individuals increases the risk of potential tampering and breach of compliance. Digital portals can act as autonomous gateways and repositories for storing, managing and sharing evidence while maintaining privacy by segregating content and users.

Why Do You Need Multiple Digital Portals for Evidence?

Digital portals help collect, store and manage evidence online, enabling sources such as law enforcement and criminal justice stakeholders to quickly and securely share evidence. By delegating the process online, stakeholders can avoid all the costs and risks of using traditional methods such as DVDs, USB drives, desktops, and other legacy systems to manage evidence. But even with an online system, there's still the matter of ensuring their privacy among the users who are utilizing the system so only those authorized have access to specific evidence.

By using multiple digital portals, evidence can be maintained in a secure and private environment where access is more simply and securely enabled only to authorized users. Digital evidence systems such as VIDIZMO come with a range of features that help ensure evidence privacy at a granular level using several autonomous portals. An autonomous portal helps keep content segregated by controlling who can log in to the portal. While certain users may be able to login into more than one portal, others can be prevented from accessing any portal unless required. This guarantees that people from other departments or agencies won't be able to access evidence unless authorized, even if someone makes a mistake managing their access and permissions. Multiple digital portals also grant a degree of autonomy to the portal contributors. As such, it's a more convenient way of ensuring privacy for digital evidence. This way, they can easily access evidence without worrying about the impact of other users.

Law enforcement agencies need to collaborate in order to solve certain cases where evidence or proceedings span multiple jurisdictions. Sometimes, different departments within a single agency need to collaborate on a single system yet only have access to certain specific evidence that their fellow officers in another department might not be authorized to access or view. Changing user rights and permissions every time a new user is added, another user needs access, or an officer is no longer authorized or working with the department can not only add an additional burden to an officer's tasks but also oversight of which can pose a risk to privacy. Similarly, parties in a criminal justice case proceedings, such as the prosecutor and public defense, may need to collaborate and share evidence files without unnecessarily giving access and potentially exposing other files or information to the opposite party. Multiple digital portals eliminate the need for micromanaging access for each user and privacy for different stakeholders.

VIDIZMO provides multiple digital portals that help segregate evidence and users. These portals help in inter and intra-agency collaboration, as well as collaboration between different stakeholders such as prosecutors and public defenders, who require collaboration, but still need to maintain a degree of privacy between them for court proceedings.

Public safety and law enforcement agencies can use autonomous digital portals to segregate content and set their own controls to manage access and privacy for users. With customizable security policies, you can enable specific users to access a portal, submit a request, or even hide the portal from view for non-member users. You can create separate portals for different teams, agencies or stakeholder departments to store, manage and share digital evidence files.

VIDIZMO also provides specific portals catering to the needs of various stakeholders operating in criminal justice and law enforcement, including:

Visit our website or contact us to learn more about VIDIZMO DEMS. You can also immediately avail a free trial to try out and explore VIDIZMO DEMS yourself.

Zohaib is a Product Marketing Manager at VIDIZMO - An expert in video streaming and digital evidence management technologies, actively researching and consolidating information regarding innovative features, customer challenges and emerging trends in these domain.