Learn more about the history of video production, how the technologies have evolved and what it looks like in today's day and age.
by Guest Blogger Updated on February 21, 2022 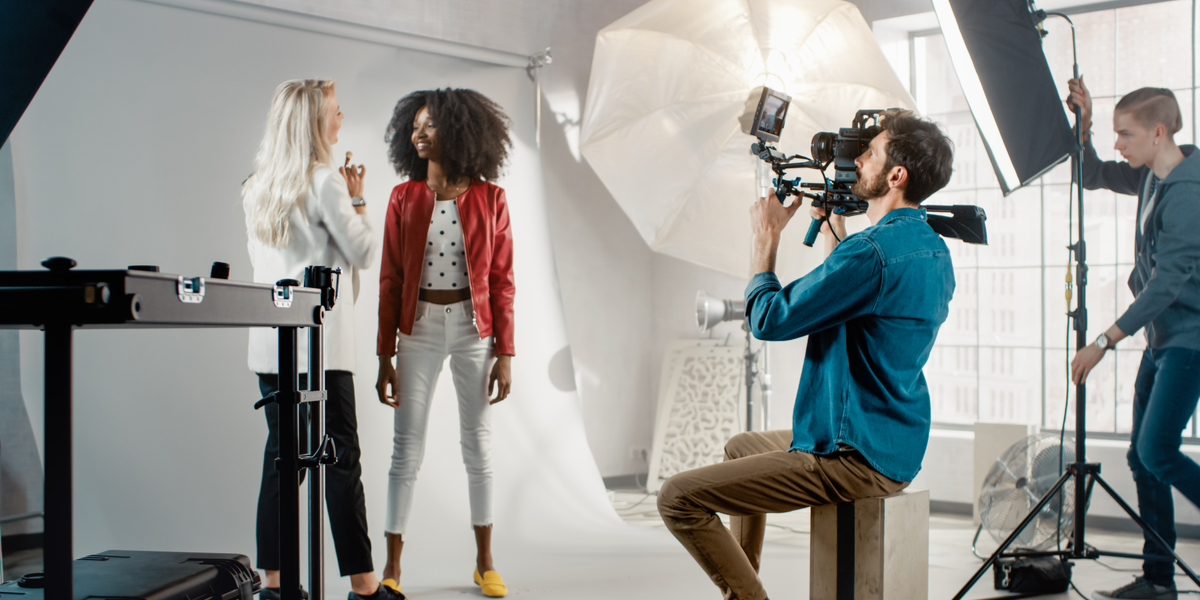 Video production has been used for a lot of reasons. It has been done for personal reasons like documenting memories, important events, or personal entertainment.

Aside from personal use, more businesses have also utilized videos to engage their market even more. They’ve been using it for advertisements, webcasts, campaigns, documenting their progress, and recording client reviews.

Given the importance of videos in both our personal and professional lives, it’s important to see how video production has evolved throughout the years.

This article will briefly discuss the timeline of important events in the video industry and how they produced opportunities for businesses.

It was in the late 1880s that The Roundhay Garden Scene was recorded. It’s widely regarded as the oldest film in existence. Even the prestigious Guinness World Records recognized this clip and gave it the title of The Oldest Film. The film just runs for two seconds and shows people playing in a garden.

After a decade from the first-ever video recorded, Thomas Edison and his assistant William Dickson created a device to record moving pictures. It was called the Kinetograph, which was one of the earliest motion picture cameras.

Two years after the debut of Kinetograph, Dickson introduced Kinetoscope - a machine that could project moving images into a screen. This gave people the idea of what videos could be in the future.

This is the era where people in video production started to experiment on what type of content they could produce with the technology they had.

In 1917, the first known animated film entitled El Apóstol was in Argentina. It used a cardboard cutout technique that used 58,000 frames at 14 frames per second.

It was also in the early 1900s that colors appeared in films. After some years, the people behind video productions started to include sounds in films which was a great addition since it provided more life to the art creation.

The growth and adoption of videos during this era were fast due to the invention of computers. It made some of the video production processes easier to do.

This is also the time when companies created technologies to make everyday people have more access to creating and editing videos.

Some companies understood the demand for videos and created a portable video recorder in 1964. A decade later, the release of discs replacing bulk rolled films and VHS came to the public in 1977.

The rise of technological advancement also disrupted the video editing process. Producers and editors now had the option to edit the video clips and place them on alternate timelines, which was a time saver compared to modifying the original content.

In this era, many traditional things were transformed and became high-tech due to the technologies at this time. Traditional telephones have evolved to predictive dialers, books are now digitally available through kindle and ebooks, and productive meetings can be achieved online.

As for video production and its industry, this is the time where they really took off. The production of videos, whether for personal or business purposes, was much easier to do. People could do it in their homes, on their phones, and other high-tech gadgets. 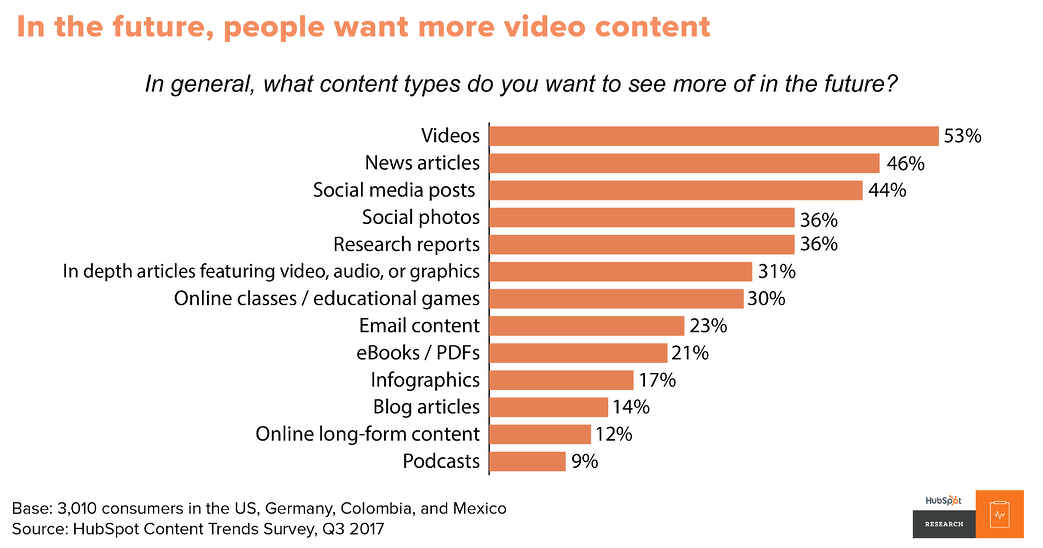 It is also at this time where consumers started to prefer video content over other forms. Results from multiple studies, surveys, and online quizzes showed that consumers were more engaged with video content than any other format.

The mass adoption of video content could be attributed to the rise of social media platforms. This made videos created by businesses and individuals be easily seen and digested by the public.

And how can we forget YouTube? This video sharing platform has allowed people from all over he world to create engaging content and share it with their audiences.

Businesses are the ones who have greatly benefitted the evolution of the video industry. With the strategic planning of brand designers and marketers, they could leverage videos to highlight the best features of their business and gain more prospects.

When it comes to sharing videos with the public, YouTube or any public platform would be great. However, if organizations want to share internal information with employees (such as the recipe for their top-notch drink), then these platforms aren’t the best. 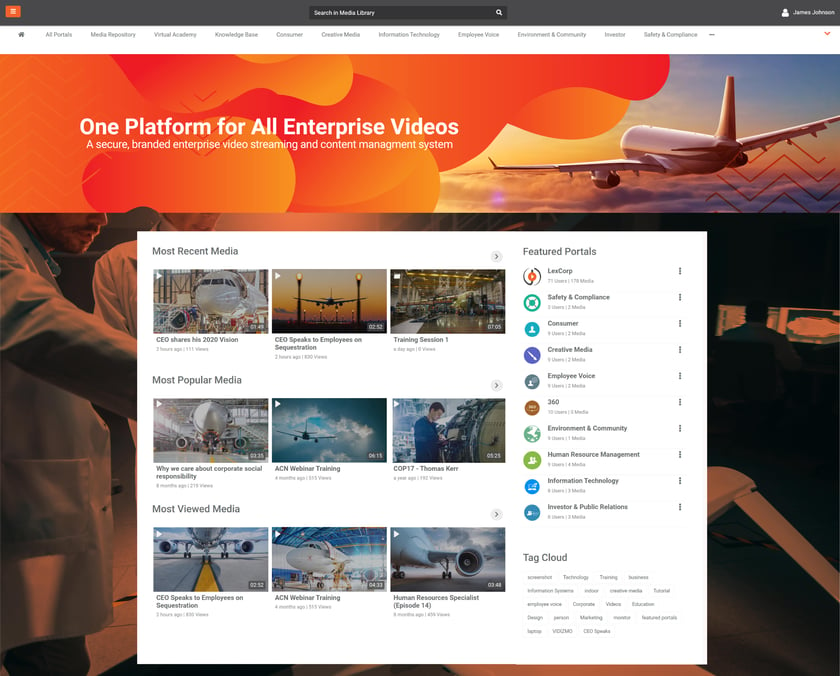 One important aspect in the whole evolution of video production would be the creation of multiple video categories. These categories have allowed businesses to advertise their campaigns more strategically. Get to know more about it below.

As more and more people are engaged with videos, educators and businesses have found this medium useful to teach their market. This style of content is much more engaging than reading texts on books and websites.

Plus, the people behind the video have more flexibility in explaining concepts and demonstrating certain topics. Using videos will allow the educator to go deeper into the topic and discuss things further in detail.

Educational videos are sometimes used in classroom settings to give teaching more versatility. But it is also extensively used in corporate settings to train employees like retail sales training.

If the topic needs demonstration, educational videos are your best bet to get those lessons across to your viewers. Look at how this website which used a video to talk about the benefits of yoga and demonstrated a few poses for its clients.

As more people get involved in social media, businesses have used these platforms to promote their products and services. These companies leveraged videos to promote what they have to offer in an engaging and entertaining way.

Promotional videos have also seen an evolution in their own right. It has undergone a long format to a short video wherein a clip only plays for a few seconds.

Here is an example of a promotional video that we made.

These videos are the simplest and easiest to understand. They should be delivered that way since the content is about delivering information to your viewers or the public.

This category has evolved throughout the years since spreading information is no longer done only by people in a Television station. Any person who is willing enough can now create a video to inform the public.

It is important to note that informational videos aren’t restricted to formal news; businesses with complex processes can also participate in this. They can use this type of video to teach the process of buying products from their online store.

An example could be if a website has a long checkout process, the business can create a video on navigating their buying process. Businesses inform their market on these processes to have lower cart abandonment emails, higher conversion rates, and improved customer experience.

Another example could be how this SaaS consultant tells clients to create informational videos on how to navigate their software and showcase how easy it is to use.

But informational videos aren’t limited to only teaching viewers; businesses use them to inform their market on topics like joint ventures, change of company name, and job hirings.

This website displays an example of an informational video on job hiring wherein it used a short video clip to inform its market of an open position in their company.

This category is what catapulted videos to mainstream adoption. The evolution of black and white movies to colored ones was one of the main reasons video content was such a hit to the masses.

Entertainment videos can have a vast scope when it comes to their purpose and genre. These videos can be funny videos, skits, music videos, reality shows, game shows, short films, to movies.

Netflix, Amazon Prime and others stream videos of this type. By following the concept of VOD, these platforms provide content to viewers in exchange for a small subscription fee.

These types of videos are so powerful that businesses combine them with promotional purposes. This makes the overall content fun and engaging to watch.

One can argue that this falls under the number four, but this technology is so new that we had to separate it from the rest. The most recent and advanced category among this list are videos under the virtual reality industry. These types of videos are usually partnered with a headset.

These particular videos are different from the rest since the viewers are immersed digitally in what the video is presenting. They are watching like the video is unfolding in front of them.

The videos under this category can usually be seen in the video games industry, but some businesses are already taking part in this innovation to provide something new to their market.

The videos that we watch and enjoy today have come a long way from their beginnings. It took years of constant innovation in the industry for us to enjoy the quality and definition of the videos we watch now.

As video production and its industry continue to evolve as years go by, expect that there will be new categories as well. Categories that people will love and businesses will capitalize on.

The state of the video industry is on a great path to constant innovation as technology also becomes more high-tech. It’s an exciting space to watch and be involved in.

To stay tuned with great content regarding the video industry, make sure to subscribe to our blog.

This article was submitted as a guest post by Burkhard Berger, who is the founder of Novum™. You can follow him on his journey from 0 to 100,000 monthly visitors on novumhq.com. His articles include some of the best growth hacking strategies and digital scaling tactics that he has learned from his own successes and failures.

This article has been submitted as a guest blog. If you wish to submit an article to our video streaming blog, do contact us at websales@vidizmo.com.